Before the Initial Public Offering (IPO) goes ahead, market sources believe that Massivit3D aims to raise $50 million in funding, in a deal valuing the company at $200 million. Although it’s currently unclear where this investment will come from, interior design firm Klil Industries and 3D printer manufacturer Stratasys have provided funding in the past.

“In future, one of the main barriers to adopting 3D printing will be speed,” said Erez Zimerman, CEO of Massivit3D. “That’s why Massivit has developed our technology, in which we can print at least 30 times faster than related systems, and this will allow more and more companies to adopt 3D printing on the industrial side.” 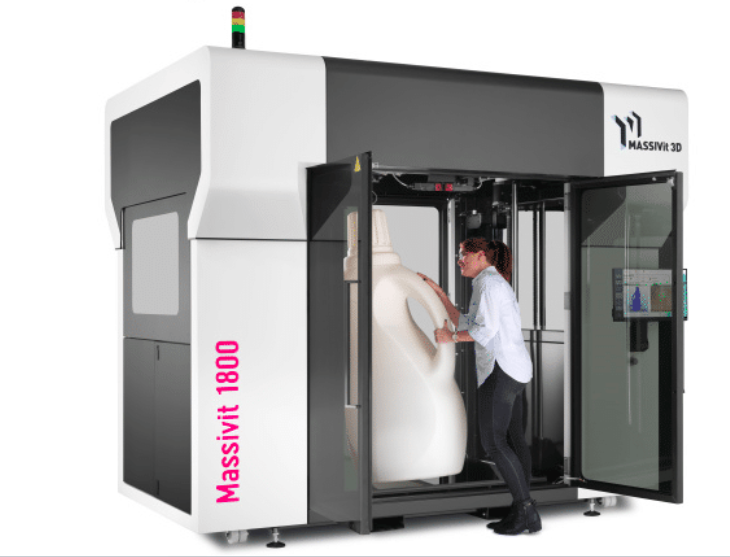 Founded in 2013 and based in the Israeli city of Lod, Massivit3D manufactures and markets large-format 3D printers, in addition to an accompanying array of materials and software. The company’s product range is essentially designed to enable clients in the engineering and architectural markets to create scale one models and parts quickly and cost-effectively.

Massivit3D’s newest system, the ‘Massivit3D 10000,’ is set to be launched in fall 2021, and is built to address the tooling requirements of those in the automotive and aerospace sectors. The printer operates using the firm’s Cast-In-Motion (CIM) technology, in which a gel is cured, cast into shape, and immersed in water to allow sacrificial materials to break off.

The machine features a large build volume, that enables users to fabricate complex tooling designs in vast numbers, while accelerating the process of iterating new product designs. Although Massivit3D hasn’t specified the exact build area of its upcoming machine, it does claim that it’s “at least 30 times faster” that similar casting-based systems.

At present, the company holds 52 technology patents, and it has received five contingent purchase orders from clients in the U.S, U.K, France and Taiwan. With its application to be listed on the TASE, Massivit3D is now attempting to accelerate the commercialization of its technology, and expand further into the architecture and renewable energy markets.

Given that Massivit3D isn’t a publicly-listed company just yet, there’s very little information about its finances in the public domain. However, it’s understood that the firm has raised around $20-$30 million in previous funding rounds, with investors including Klil’s Zvi Neta and Tzuri Daboosh as well as Stratasys.

Whether Massivit3D’s IPO is financed by these investors again or the company finds new backers remains to be seen, but it has been confirmed that equity firm Poalim IBI will underwrite the offering. Massivit3D’s valuation appears to be based on its earnings and technological potential, and it reportedly turned over $50 million in revenue from 2017 to 2019.

Although it has also been reported that the company’s sales in 2020 were impacted by the pandemic, it’s now understood to be entering revenue recovery like the rest of the 3D printing industry. 3D Systems, for instance, recently posted strong initial Q4 2020 results, while PyroGenesis’ financial guidance projected growth of over 300%.

Massivit3D was also co-founded by Gershon Miller, a seasoned entrepreneur who has sold firms like Idanit to Scitex before, and most recently sold Objet to Stratasys. As a result, the company’s offering appears to be in safe hands, while more generally, its progress reflects a growing industry enthusiasm for IPOs.

Desktop Metal went public on the NYSE last year after a merger with Trine Acquisition, which saw the company raise $580 million in capital, effectively funding its $300 million acquisition of EnvisionTEC. Israeli tech firms have also been active on the TASE recently, with additive food company Meat-Tech 3D filing for an IPO in November 2019.

3D printing on a grand scale

Massivit3D isn’t the only company that manufactures large-format 3D printers, and a range of other scalable systems have developed in recent years.

Elsewhere, in a more application-focused approach, 3D Systems is developing the “world’s largest 3D printer” for the U.S. Army. The machine’s 1m x 1m x 600mm build area is designed to enable the fabrication of parts that address the ammunition, vehicle, helicopter, and missile defense demands of the Armed Forces.

Please do read the original article by Paul Hanaphy here.