An early adopter of 3D printing, Dental Masters utilized many competing brands of 3D printers and resins before settling on the Envision One desktop 3D printer for creating RPD patterns and models.

Introducing Fiber™. Starting at $3,495. Combining continuous fiber tape with industry-proven composites, Fiber™ makes it possible for every engineer to create parts with unrivaled strength and lightness, all from their desktop. Learn more at desktopmetal.com/fiber.

The uses depicted are actual uses by customers based on professionally designed parts using the Fiber™ printer. What you design, print, build, and use is your responsibility. Build responsibly.

Desktop Metal invited thought leaders in additive manufacturing to come together to share their vision on the future of AM and the next frontier for the manufacturing industry. Roundtable participants include (from left to right):

Desktop Metal (Burlington, Mass., U.S.), a company that specializes in metal 3D printing for product development and mass production, has announced it will expand its technology to include the composites community. Desktop Metal was founded in 2015 with a mission “to make 3D printing accessible for all engineers, designers and manufacturers,” and since then the company has brought two 3D printing technologies to market — its office-friendly metal 3D printing Studio System and its high-volume Production System metal 3D printer, which is capable of printing speeds up to 12,000 cm3/hr. Now, the company is unveiling what it says is the world’s first true continuous fiber desktop printer.

“We are now expanding our offering to bring continuous fiber 3D printing to the desktop of every engineer and designer,” says Ric Fulop, CEO and founder of Desktop Metal.

Recent advances in additive manufacturing have seen its use become increasingly widespread for prototyping, as well as for jigs, fixtures and tooling. Desktop Metal predicts the technology will experience 10-50X growth over the next decade as a means for manufacturing end-use parts. The company recognized an opportunity in the market to bring 3D printing to an underserved area — the automation of small composites parts manufacturing. Kicking off its entry into the composites sector, Desktop Metal recently acquired Make Composites Inc. (Boston, Mass., U.S.), a startup company founded by Konstantine Fetfatsidis. Fetfatsidis was recently named 2019 SAMPE Young Professional of the Year and served previously as the advanced manufacturing R&D lead at Aurora Flight Sciences (Manassas, Va., U.S.), a Boeing company.

Fetfatsidis, now vice president of composites products for Desktop Metal, explains his inspiration for starting Make. “Based on my experience in composites R&D and also in aerostructures business development dealing with customers, I got to see and work with what was accessible and the various manufacturing technologies available, and frankly got a little bit frustrated with hand layup still being state-of-the-art, particularly for the smaller parts,” he says.

He argues that for small parts — less than 20 pounds — manufacturers still rely primarily on hand layup. Such labor-intensive processes require technicians, expensive tooling and a lot of time, all of which increase the overall cost of manufacturing a part.

“Throughout my career there have been so many applications where we’d have loved to use carbon fiber — particularly at Aurora while working on eVTOL concepts — for its lightweight properties, stiffness and the strength, but the costs just didn’t add up,” says Fetfatsidis. “I thought to myself, there’s got to be a better way to automate, consolidate the number of process steps involved in traditional manufacturing, reduce tooling and reduce lead times — all the costs associated with it.”

While attempts have been made to automate the manufacture of small composite parts, the properties rarely reach the quality that industrial users are accustomed to with hand layup, and certainly not in a desktop process. In most composites 3D printing today, the resins are often not the same as those used in traditional processes, and many printers use proprietary materials that do not offer the same high performance as qualified materials, leading to non-uniformity and variability in quality. Resulting parts typically have lower fiber volume content and higher porosity than parts manufactured by hand.

“Really there has been no end-to-end solution to do this on a desktop level with the materials that folks are used to using, until now,” says Fulop. “We’re combining the benefits of 3D printing with continuous fiber materials that are qualified for high-performance applications.” 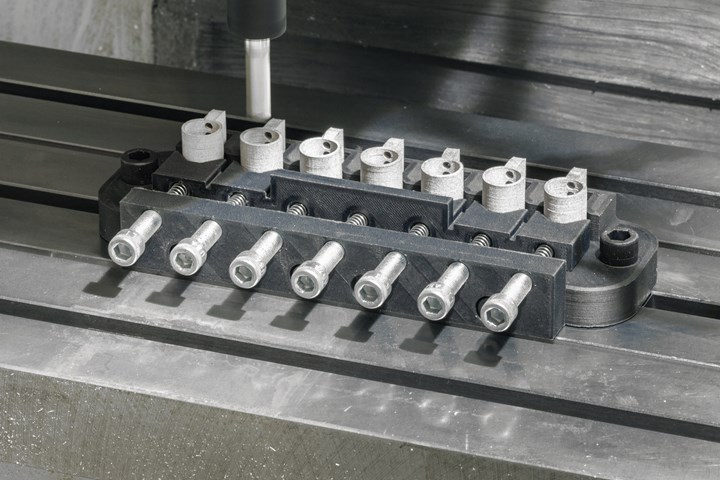 The printer, which the company is calling Fiber, is designed as a modular tool changing system for use in an office or production floor environment and is capable of delivering industrial-grade manufacturing jigs, jaws, tools and fixtures, as well as end-use parts. The operator can use a Micro AFP head to lay out material and then park it and switch to a fused filament fabrication (FFF) head as needed.

“For the first time, Fiber printers combine the material properties of high performance AFP continuous fiber materials with the affordability and speed of a desktop 3D printer,” says Fulop.

The technology uses the same UD tapes qualified for high-performance applications. While the printer is capable of processing UD tapes with a wide variety of fiber and thermoplastic matrix systems, the materials available initially for the system will include polyamide 6 (PA6) with carbon fiber and glass fiber reinforcements, as well as polyetheretherketone (PEEK) and polyetherketonketone (PEKK) with carbon fiber reinforcement. The tapes, offered in a 3-millimeter-wide format, typically feature 12K tow fibers and are spooled on proprietary reels. A single 3-millimeter-wide tow is fed through the head until it gets down to the nip region, where a non-contact heater gets the temperature of the thermoplastic above its melt temperature, and a compaction roller applies pressure for consolidation of the incoming tape to the substrate beneath. A cutter in the head cuts the tape at the end of each pass. According to Fetfatsidis, the tapes offer a solution that is higher quality but more than 10 times less expensive on a per-Liter basis than a spool of 1K tow filament used in some of extrusion-based 3D printers that use continuous fiber. Plus, the higher quality of the tapes coupled with the ability to add pressure to the part through the AFP process translates to higher strength.

“We have very high-quality tapes that are used in AFP/ATL processes that have very high fiber volume loading — 60% carbon fiber — and we put that together with PEEK or PEKK high-temp matrix,” says Fetfatsidis.

Parts created with the Fiber system are said to be stronger than steel, lighter than aluminum and can be printed on the desktop. Fiber has a build volume of 320 by 240 by 270 millimeters (12.6 by 9.4 by 10.6 inches). Benefits include continuous fiber reinforcement throughout the entire part and very little porosity. Fetfatsidis says parts created with PA6 tapes can have less than 5% porosity and PEEK/PEKK tapes can yield parts with less than 1% porosity. The operator has the ability to steer tows to achieve complex shapes or particular load conditions. And because the resins are thermoplastics, the need for an autoclave cure is eliminated, as well as the need for storing the material in a freezer.

“This is very much the first product in the 3D printing realm that combines continuous carbon fiber with PEEK and PEKK in a desktop,” says Fulop.

While Desktop Metal’s solution boasts several benefits including the ability to create end-use parts and the use of thermoplastics, arguably one of the most exciting aspects of the Fiber system is its affordability. Most systems that use continuous fiber thermoplastic tapes for the automated manufacture of composite parts are million-dollar systems. Desktop Metal’s Fiber system is available in two models through a subscription service. Fiber HT is designed to produce parts with continuous composites with <1% porosity and up to 60% continuous fiber loading with advanced matrix, including PEEK and PEKK. It can make UL 94-V0 flame retardant parts to withstand high temperatures up to 250°C, in addition to ESD compliant parts. The Fiber HT model starts at an introductory price of $5,495 per year. Meanwhile, Fiber LT starts at $3,495 per year, offering an affordable way to produce high strength ESD compliant, non-marring parts using continuous fiber with <5% porosity with PA6 thermoplastics. ESD end effector. End effectors are used during the manufacturing process of printed circuit boards (PCB). This part was made with the Fiber system’s electrostatic discharge (ESD)-safe carbon fiber-reinforced PA6, to help protect PCBs from damaging electrostatic discharge throughout the assembly process. Printed as a continuous carbon fiber composite, the end effectors are extremely stiff, lightweight and able to withstand the loading of the PCB’s assembly process.  Source | Desktop Metal

“We want people to be able to buy the system, have it at their desktop at their home or office and make PEEK parts with continuous fiber,” says Fetfatsidis.

“For a few thousand dollars you can start making composite parts with high performance made out of the same tape technology that’s now used in really high-end AFP-manufactured parts,” adds Fulop.

As 3D printing’s role in manufacturing continues to grow, designers and engineers need solutions that enable a wide range of materials to be accessible. The Fiber system is a big step forward toward putting high-performance composite materials within reach of anyone who wants to take advantage of the light weight, strength and stiffness that composites offer. Desktop Metal will showcase its Fiber continuous fiber desktop 3D printing system at Formnext 2019 additive manufacturing exhibition and conference, Nov. 19-22 in Frankfurt, Germany.

Since its beginnings, the company Desktop Metal has been making a lot of noise in the world of 3D printing and beyond. Founded in October 2015, the company designs, manufactures and markets metal additive manufacturing systems that are revolutionising metal fabrication…watch the video.